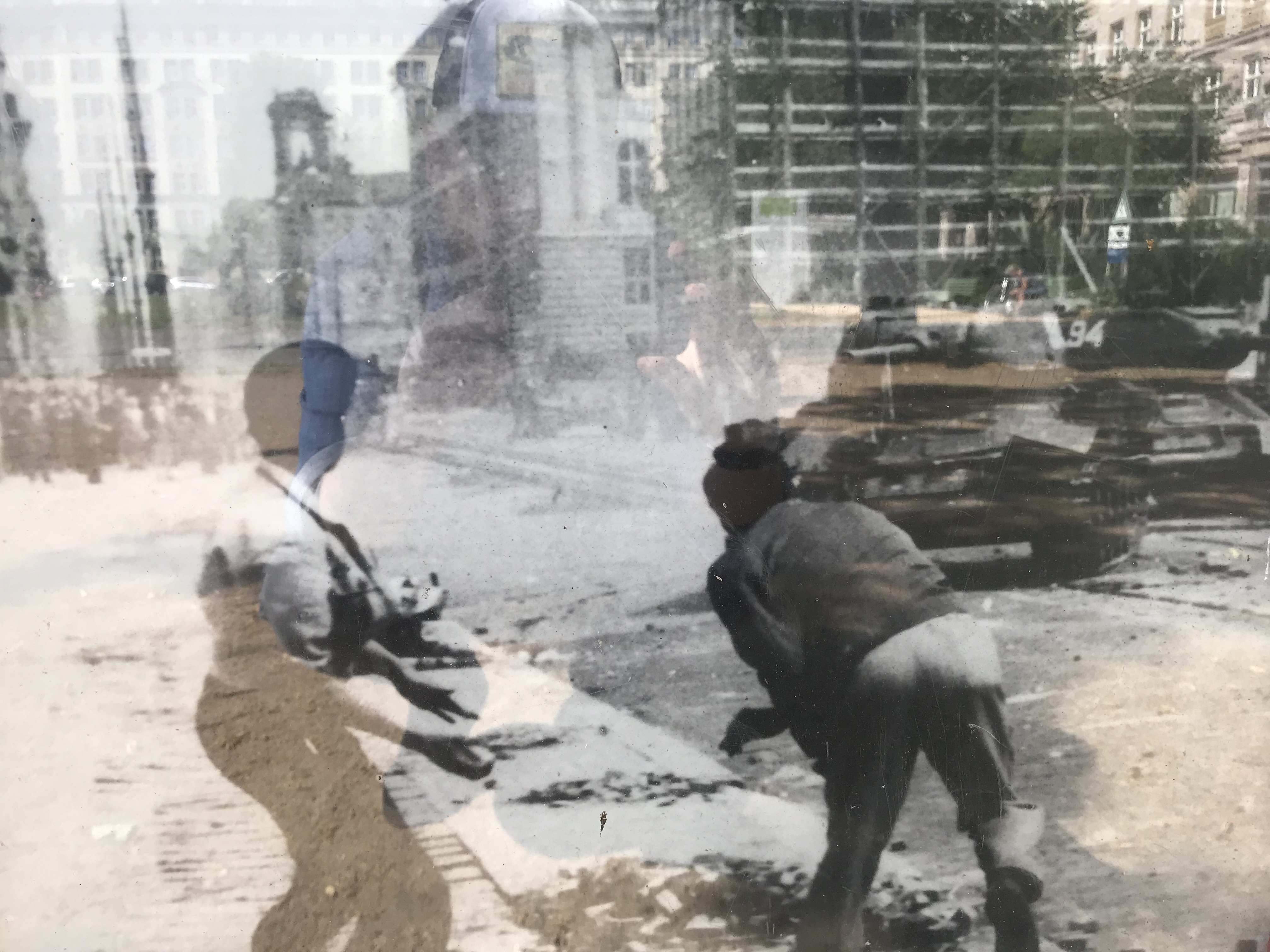 In an earlier post, I wrote about the views from the place that I am staying in Berlin, on Karl Marx Allee. Over the weeks staying here, I have really fallen for the Boulevard of Broken Dreams as the newspaper Das Speigel referred to it in 1997. It’s gigantism dwarfs you, even cars look dinky under its giant oaks and Land of the Giants streetlamps. It gets a tad busy between seven and nine in the morning, otherwise it’s pretty quiet, and the road is so far away from the buildings, nothing disturbs you, except the odd cyclist zipping past you on the cycle paths. You can walk under shady trees on the dusty pavements the size of national roads in some countries, you laze in flowery parks, it’s like no other main street in any other city in the world. And that’s before you even get to thinking of the Soviet-classicist buildings reflecting the golden sun, covering us all in a golden hue. Aldo Rossi calls it Europe’s last great street. But it wasn’t always like this. Karl Marx Allee is symptomatic of Berlin’s turbulent history.

In the eighteenth century, Berlin had expanded eastwards to Frankfurter Tor (Frankfurt Gate). This was one of the gates through which traffic entered the city. Just outside my building are the U-Bahn steps for Weberweise (Weaver’s Meadow), this marked the end of what was called Grosse Frankfurterstrasse. During the nineteenth century, Berlin was transformed by industrialisation and migration, and the area around Grosse Frankfurterstrasse became the centre of the booming textile industry.

The current avenue stretches for two kilometres from Mitte to Friedrichshain. Man, it’s impressive. Stalinallee as it was renamed was a flagship construction project, of East Germany’s reconstruction programme after World War II. It was designed as a message to the West, that the socialist GDR could create great things. The avenue is three hundred feet wide and is lined with monumental eight story buildings in the social classicism style of the Soviet Union. Eight stories is high for Berlin and the strangely named wedding cake style reminds one more of Moscow than the German capital. The avenue is bookended at each end with the dual towers of Frankfurter Tor and Strausberger Platz. It is so iconic, even now sixty years after it was constructed.

After its completion in the mid-fifties, the Boulevard became the place to be seen, ‘Taking the E line to the shops on Stalin Boulevard’ became a catchy slogan. People could find things here, that could be found nowhere else and could relax in stylish places like Cafe Sybille or the Kosmos cinema. The boulevard was to be representative of the new social order, elements were developed which gave the boulevard its unique appearance including huge candelabras, columns, balustrades, Meissen porcelain facings, fountains and clocks.

Stalin, loved a good parade, hence the expansiveness of the avenue, as it was to double as a venue for goosestepping soldiers, marching bands, loads of tanks, you now the drill, everyone saluting old Joe in his greatcoat, standing on a dais, delighted with himself.

Aesthetic highlights include pillars in the building’s entrance areas and ceramic features adorning their exterior facades. The majority of these residential buildings benefited from interior fittings on a par with western standards, including lifts and central heating.

Some more realistic Bauhaus housing buildings were built on Stalinallee between 1949 and 1950, but they were a thorn in the side of the East German head buck cats and their lofty ideas, so they actually planted tall poplars in front of them, to forget about them.

There exists a disorientating uniformity on the Boulevard, there are several U-Bahn stations strewn along it – Schillingstrasse, Strausbergerplatz, Weberweise – each with four exits – as you emerge from any of them, the buildings look the same, sentient consistent monoliths – it takes a while staying here until you can tell where you are when you first emerge from the U-Bahn.

However, behind the facade, something was rotten. In 1953, tanks rolled down Stalinallee, the Red Army crushing the workers uprising. The demonstration had been organized, among other reasons, in response to the increasingly untenable construction demands for the workers of the Stalinallee and it was mercilessly quashed.  It set down the marker towards the path that East Berlin would take, the oppression, the iron fist pounding any divisive acts or thoughts. On the morning of 16 June, 300 East Berlin construction workers marched down Stalinallle calling for a general strike; the next day 40,000 protesters gathered in East Berlin, the East German government turned to the Soviet Union to quell the protests. 20,000 Russian troops with tanks and 8,000 Volkpolizei trundled onto the streets opening fire on the protesters.

Figures vary depending on the source, but at least five hundred people were killed in the uprising and over a hundred were executed under martial law. In addition, over five thousand were arrested with over a thousand sentenced to penal camps. It is also alleged that Soviet soldiers were executed for refusing to shoot demonstrating workers.

Every year on the first of May and the seventh of October, tanks rolled down the great Stalinallee, celebrating first the workers and second the state of the GDR. The parades were televised across the country. In later years, the tanks were left out of the celebrations, but the processions continued with politicians and celebrities alongside the common people, balloons, parade floats, members of the Free German Youth holding up massive pictures of the country’s leaders.

In 1961 Stalinallee became the Karl Marx-Allee. Stalin was now something of a PR disaster and so the street was renamed, his statue was torn down and modern buildings were erected in the remaining one kilometer of the boulevard.

Through its sixties, seventies and eighties, Karl Marx- Allee aged and began to crumble, her tiles began to drop and its facades began to look tired and unfashionable.

And the citizens were not sympathetic, Karl Marx-Allee was a symbol of the odious regime and monstrous state. Indeed, its Egor-like Stasi were literally a nightmare in the attics, in the basements, between the walls.

By 1990, the street was a specter with empty sockets were once there were buzzing shopfronts.

Brenna Hughes Neghaiwi in the Paris Review writes, “When Berliners talk about life in Berlin, they like to talk about Kiezleben and Kiezkultur, colloquialisms for something like “neighborhood life.” Someone who never leaves the neighborhood is a Kiezhocker, a criticism that Berliners level against each other but never against themselves: Berliners have strong affinities toward their neighborhoods, their streets, the convenience stores nearest by their houses. Berliners always believe their Kiez to be the best Kiez—why would they go anywhere else?

Brenna continues, “The Karl-Marx-Allee doesn’t have a Kiezkultur, and everybody knows it. One lives in the Karl-Marx-Allee and goes out elsewhere; works in the Karl-Marx-Allee and cycles over to a distant coffee shop. Even the grocery stores struggle to succeed. The vibrant sidewalk life that existed when the GDR had its huge department stores, such as the Kaufhaus des Kindes, and its entertainment venues and “nationalities restaurants,” such as the Kino International or the glamorous Café Moscow, hasn’t been revived in the past twenty-five years.”

And now once again, Karl Marx Allee is on the front line. The struggle erupted last November when a property management firm announced its intention to offload 700 apartments on the road to Berlin’s largest property company. Fearing rent increases, tenants organised protest marches and hung banners from their apartments, eventually pushing the city senate to block the sale. After months of legal wrangling, the senate confirmed on Monday that three blocs containing more than 670 apartments would instead be purchased by the state-owned housing provider.