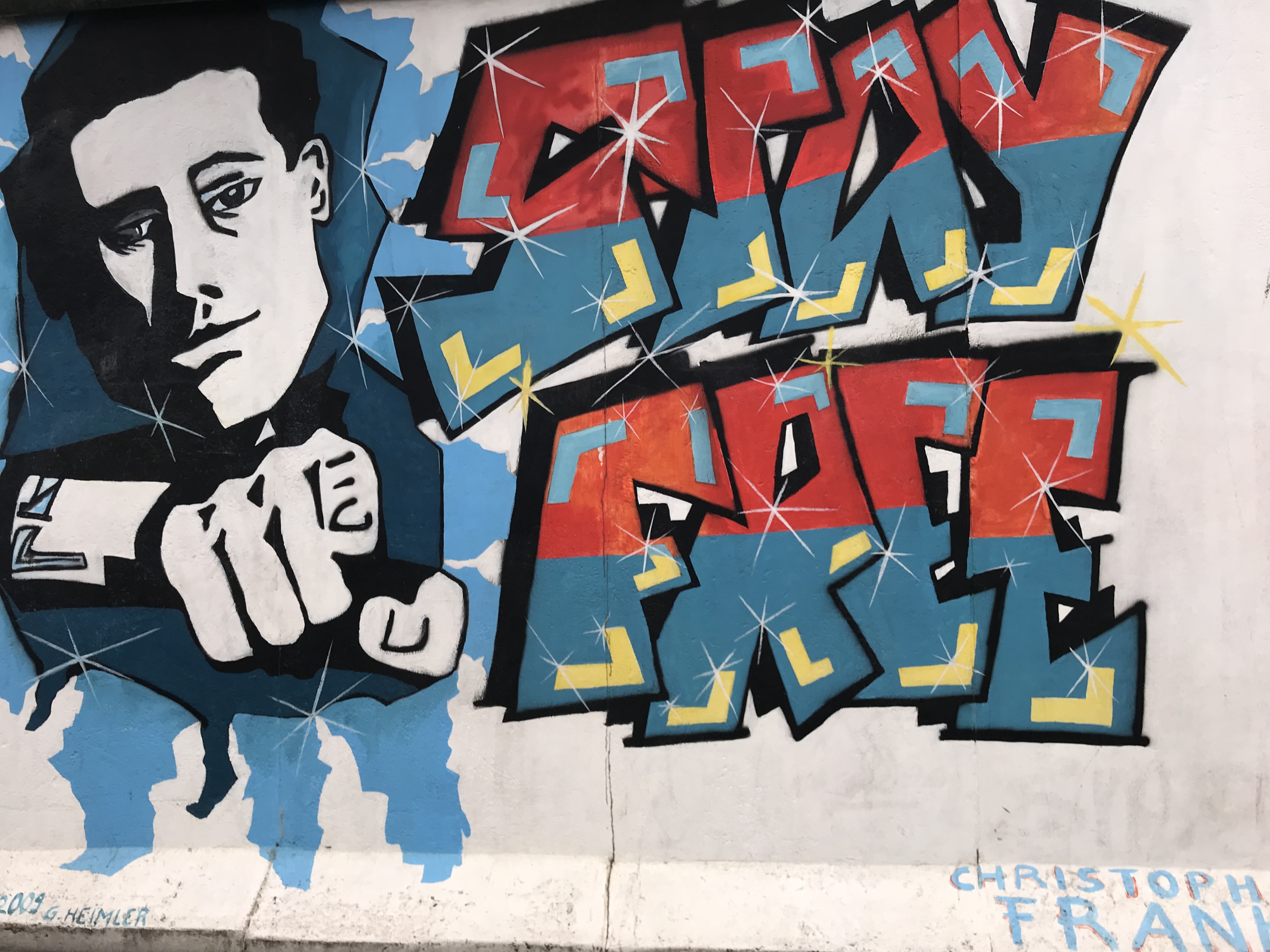 Berlin’s Street Art is as definitive to the city as Frederick The Great’s baroque, rococo and neo-classical styles or Rauch’s statue of Frederick on Unter den Linden or Schadow’s Quadriga atop of the Brandenburg Gate. Walking around Berlin, looking at the Street Art, I got to thinking of the mythologist Joseph Campbell and his description of entering the caves of Lascaux to view the 20,000 year old Palaeolithic paintings in the Dordogne region France. Speaking to Bill Moyers on the The Power of Myth in 1988, Campbell states,

‘The animal envoys of the Unseen Power no longer serve, as in primeval times, to teach and to guide mankind. Bears, lions, elephants and gazelles are in cages in our zoos. Man is no longer the newcomer in a world of unexplored plains and forests, and our immediate neighbors are not wild beasts, but other human beings contending for goods and space on a planet that is whirling without end around the fireball of a star. Neither in body nor mind do we inhabit the world of those hunting races of the Paleolithic millennia, to whose lives and lifeways we nevertheless owed the very forms of our bodies and structures of our minds. Memories of their animal envoys still must sleep, somehow, within us, for they wake a little and stir when we venture into wilderness. They wake in terror to thunder. And again they wake with a sense of recognition when we enter any one of those great painted caves. Whatever the inward darkness may have been to which the shamans of those’ caves descended in their trances, the same must lie within ourselves nightly visited in sleep.

There is a link, between us and them, stretching across twenty millennia as covert citizens among us stamp their dreams and ideals on the concrete of our city to allow us to think of what we are not thinking about – what is this place? What are we allowing happen to it? What should we be doing with it?

I started this series to consider a vanishing Berlin. Street Art is everywhere in this town, and this ephemeral medium encapsulates that concept more than any other. Everywhere you look there is street art. From world renowned artists to gang tags; from public statements and personal pleas; from criticisms of society to private puzzles; from secret messages to citizenry to inspiration for all; from raising awareness of social and political issues to providing a channel for the disenfranchised,

From the East Side Gallery and street art walking tours to the hidden puzzles you see in the most out of the way places, that in that moment, you feel is speaking directly to you and you wonder about the artist, and when they did it? And what did they want to say? And how long will their mark survive? Wandering around Berlin, keeping your eyes peeled, you see a lot.

Much has been written about the Berlin street art scene, it’s pretty muddled; when it comes to genesis of graffiti, it can never be any other way. Who knows who started it all? Who first scribbled their name on a Berlin building? Some Germanic barbarian? Or some Colln market trader? Some Brandenburg margrave or some ancient Wend? Who was the first to write their names in letters nine feet high? Who was the first to harness themselves to a chimney stack and abseil down nine floors, tattooing its gable wall with their tag? Who was the first to stencil thought provoking images on the monstrous steel and concrete environment? Who decided to mark the ponderous grey concrete in technicolor? Who first decided to communicate to one another in puzzling stencils across swathes of Berlin high-rise and subterranean underground?

Whoever did, from them, a movement blossomed. They stamp their city, their names, their Art. They have as much a say, make as much a statement, as the city planners, the head buck cat architects and property developers. Perhaps it is akin to a form of group therapy, the shouting out to the like-minded, the attempted conversion of the lemmings. Some are masterpieces, some are goddamn awful, like any gallery. But those with the courage to display themselves give inspiration to others to display themselves.

But there is Thierry Noir – the first dude to take The Wall back. That cursed obliteration. He told The Guardian, “I started painting outside because I wanted to say that it’s good to put art in the streets and not solely in museums and galleries. At the time my influences were everyone from Pablo Picasso and Joan Miro to Jean-Michel Basquiat and Keith Haring, plus musicians like David Bowie, Iggy Pop, Lou Reed, Kraftwerk, Led Zeppelin and Nina Hagen. My early paintings on the Wall were very different to my later style. My style changed out of necessity, because every day hundreds of people would come up to me and ask me questions. So I had to adapt to be quicker, which became my Fast Form Manifesto. The Fast Form Manifesto is a good recipe for people who have to paint fast in dangerous environments, or with constantly interruptions. You need two ideas and three colours. It was a way for me to show people that this mythical wall was not built for ever and could be changed.”

Thierry continues, “It was the 100th anniversary of the Statue of Liberty, so I found some spray cans and with Christophe Bouchet made a two-metre-high stencil. It was made from a plastic napkin fixed on a wooden frame. On the Fourth of July, we put up 42 Statues of Liberty on the Wall at Checkpoint Charlie. It was well guarded and dangerous to paint there. We did not have enough money for more spray paint to do more the next day. As David Bowie said in his 1982 song Heroes: ‘You can be heroes, just for one day.”

Others followed, they transformed fourteen feet monstrosity that was The Wall into a blank canvas for artists to voice their protests. The fact that the East Side remained blank; illuminated the fear, the shitty Stasi surveillance, the lack of freedom behind the Wall.

In that interview with Joseph Campbell, Bill Moyers asked him, “Do you ever look at these primitive art objects, and think not of the art but of the man or woman standing there, painting or creating? And he answered, with –

“Oh, this is what hits you when you go into those caves, I can tell you that. What was in their mind when they were doing that? And that’s not an easy thing to do. And how did they get up there? And how did they see anything? And what kind of light did they have the little flashing torches throwing flickering things on it, to get something of that grace and perfection? And with respect to the problem of beauty, is this beauty intended, or is this something that is the natural expression of a beautiful spirit. You know what I mean? When you hear a bird sing, the beauty of the bird’s song, is this intentional, in what sense is it intentional? But it’s the expression of the bird, the beauty of the bird’s spirit, you might almost say, and I think that way very often about this art. To what degree was the intention of the artist, what we would call “aesthetic,” or to what degree expressive, you know, and to what degree something that they simply had learned to do that way? It’s a difficult point. When a spider makes a beautiful web, the beauty comes out of the spider’s nature, you know, it’s instinctive beauty. And how much of the beauty of our own lives is the beauty of being alive, and how much of it is conscious intention?