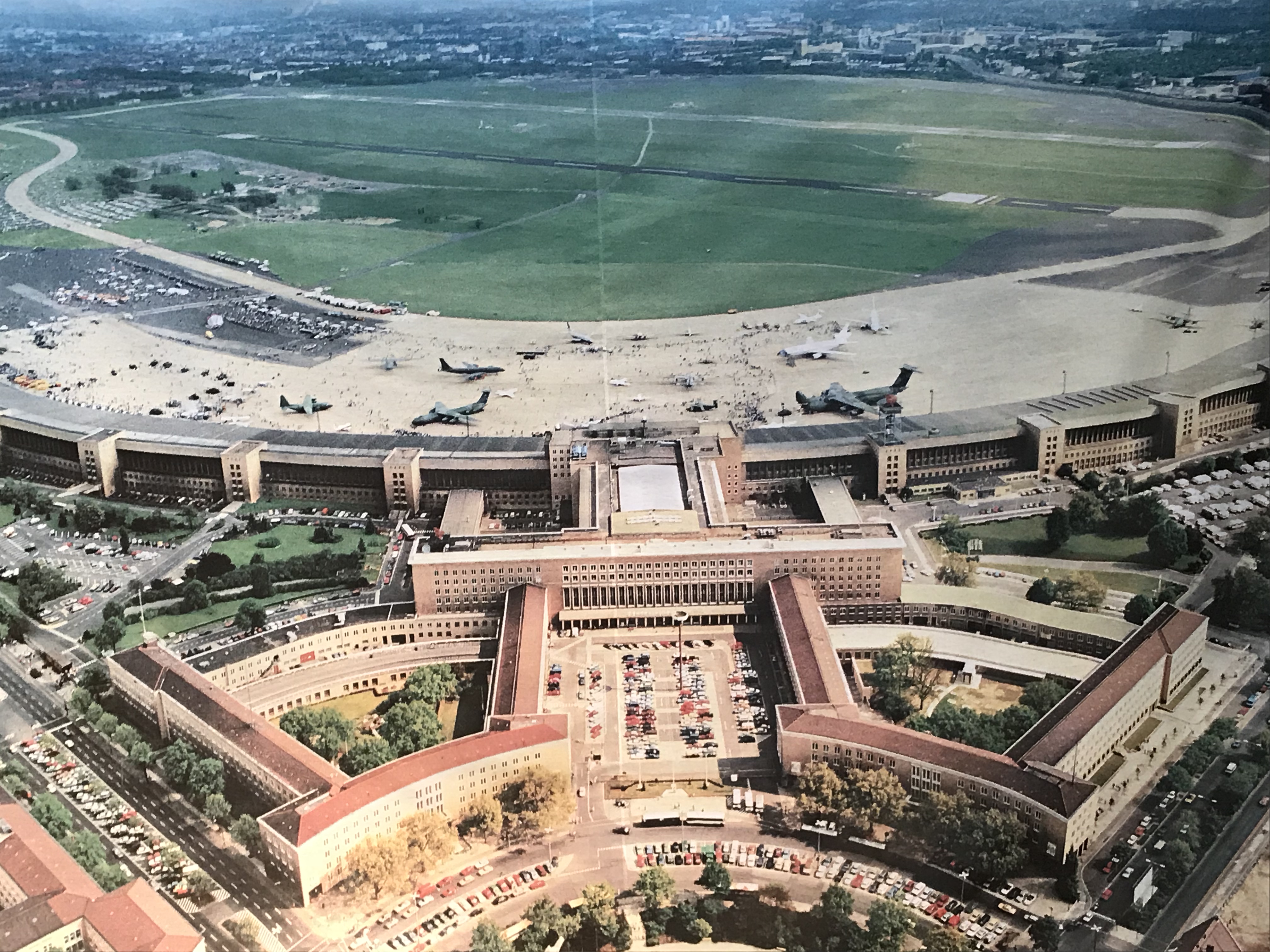 The runway is stuffed with people, whilst the terminal is empty. Templehof, once the mother of all airports, lies empty, the fact that it is one of the largest buildings in the world, makes it all the more bizarre. In terms of square footage, it is beaten only by The Pentagon, Ceausescu’s Parliament Palace in Bucharest and several newer international airports. Only in Berlin, could a 400 hectare site slap bang in the city centre be left abandoned, or at least huge swathes of it, be left abandoned. Hectares are confusing, what is a hectare? Well, Monaco is 200 hectares, that gives you an idea, Templehof is twice the size of Monaco. As you walk around abandoned Templehof, hearing your footsteps echo around it’s giant halls, you can look out the windows and in the distance, hordes of Berliners stroll, jog, roller blade and cycle on the runway, while people loll in the grass tending barbecues and sipping beer. How wonderfully odd.

Templehof airport closed it’s doors in 2008 after an incredible history. The site in medieval Berlin was owned by the Knights Templar, hence the name, Templehof. The Prussians and latterly united German forces used the site as a parade ground right up to the start of World War I. The first flights at the site took place when Frenchman Armand Zipfel and the American Orville Wright launched flight demonstrations from there in 1909. Templehof was first officially designated as an airport in 1923.

When the Nazis took power with their lofty futuristic plans, Templehof was handed over to the supervision of chief Nazi architect, Albert Speer with the direction to design the gateway to Europe and a symbol of Hitler’s world capital, ‘Germania’. Speer directed architect, Prof. Ernst Sagabiel to replace the old terminal building and man did he do that, the building complex was designed to resemble an eagle in flight with semicircular hangars forming the bird’s spread wings, the 1.2 km quadrant is still something to behold.

Check out the giant canopy roof, high enough to accommodate most of the aircraft used by the airport even in the decades after WWII. The aircraft could taxi all the way to the building and under the canopy. Passengers could then board and disembark from the plane protected from the elements. Look closely at the picture above and you will see a whole lot of steel holding up the roof, more steel than would be required for a roof. That’s because it was to be more than a roof, the Nazis again were thinking ahead to their dastardly plans – they saw Templehof as the perfect site to parade their victorious armies, and saw the roof as the perfect place to install bleacher seats for one hundred thousand spectators to watch the triumphant Reich armies goosestep around the pan and Luftwaffe air displays dive and soar in the skies above.

During World War II, all civil aviation was moved to an airfield in Rangsdorf, whilst Templehof was used to assemble Stuka dive bombers. Soviet forces took Templehof in the Battle of Berlin in April 1945, but after the division of Berlin, it fell under the control of American forces. Thankfully, for Templehof was to prove the vital artery with which the Allies kept Berlin from been completely overrun by the Soviets. Apart from the Cuban Missile Crisis, the world has never been closer to a Third World War than during the first tense months of the Berlin crisis of 1948.

The Berlin blockade was introduced so gradually that the West was not initially aware of what was occurring. However, on 31 March 1948, the Soviets announced that all western nationals travelling to Berlin via the Autobahn and railway would be required to show identification at Soviet control points. From that date, the Soviets escalated their control over Berlin. The Allies with only 6,500 troops in Berlin were in a very vulnerable position, when you contemplate that Stalin had 300 divisions, almost 400,000 troops within striking distance of Berlin. Step in General Lucius Dubignon Clay, stating, ‘Why are we in Europe? We have lost Czechoslovakia. We have lost Finland. Norway is threatened…After Berlin, will come western Germany and our strength there, relatively, is no greater and our position no more tenable than Berlin. If we mean that we are to hold Europe against Communism, we must not budge. We can take humiliation and pressure short of war in Berlin without losing face. If we move, our position in Europe is threatened. If America does not know this, does not believe that the issue is cast now, then it will never and Communism will run rampant. I believe the future of democracy requires us to stay here until we are forced out.’

Them’s fighting words. On 23 June 1948, the Soviets barricaded all roads, canals and rail links leading to the western zones. Berliners were terrified, few believed that the city could hold out against the Soviet threat, may wanted to flee, but that was now impossible, everyone was trapped and there was only a couple of months supply of food and coal. US army Lieutenant-General Albert Wedemeyer suggested an airlift, an unprecedented airlift in terms of scale, to bring food and supplies to the citizens of besieged Berlin. The first plane landed at Templehof on Saturday 26 June 1948. What started as a haphazard affair, became one of the most efficient, large scale operations the world as ever seen. Marshaled by the extraordinary US air force transportation expert, General William H. Turner. The logistics of the operation were mind blowing, indeed the lessons learned in dealing with the sheer volume of planes later proved pivotal in creating the international system of air traffic control. The Allies built a second and a third runway at Templehof, used the airstrip at Gatow in the British sector and Lake Havel at Gatow where Sunderland Flying Boats were landed. And finally they constructed Tegel Airport – this became a lasting symbol of Berliners defiance – with almost 2,000 Berliners working on the runway laying over 10 million bricks scavenged from rubble. At the height of the airlift up to 8,000 tons were been brought each day. The missions were difficult and dangerous. Crews were making two or more round trips a day, seven days a week, in all weather; for tours of up to six months in old planes in need of repair with Soviet planes buzzing them and Soviet anti-aircraft guns blinding them with lights and jamming vital Allied radio incidents.

Berliners were incredibly thankful, they began to turn up at Templehof with presents, for the pilots, which for many consisted of their few prized possessions. Towards the end of 1948, west Berliners had become actively pro-western. Unlike many Germans in the west who still resented the western Allies, Berliners began to embrace American culture – cinemas showed American movies, clubs and cafes played American music, even people started using American expressions and idioms. The success of the airlift was a huge blow to Stalin, he had not expected it to succeed, he had assumed it would go the way of the Nazi’s failed attempt to supply Stalingrad or of the unsuccessful attempts by the Americans and British to supply Warsaw in 1944. In May 1949, he gave up the ghost and lifted the blockade. The only reminder now in Berlin of the airlift is on the approach to Templehof airport where a soaring fan shaped sculpture with three gigantic arcs points west in the direction of the air corridors that kept Berlin alive through the winter of 1948/49 with 2.5 million tonnes of food and supplies on some 280,000 flights. The names of the 73 Allied airmen and 5 Germans that were killed during the year long operation are carved on its surface.

The Berlin crisis defined the beginning of the Cold War proper, battle lines were now drawn across Europe, across what would be termed the Iron Curtain. Berliners had been transformed from a defeated, disgraced enemy people into a new western ally. The Americans who had expressed confidently that they would leave by 1952, realised that they had to remain to protect western Europe from the Soviet threat. There were now two giant superpowers brushing against one another and if Berlin was the flash point. Templehof was the symbol of defiance.

Rambling around the site of Templehof airport today is very interesting. Relatively few bombs were dropped on Templehof during World War II, partly because the Nazis protected it with antiaircraft guns, it was also because the Allied forces knew they could use it after the war. so most of the airport remained intact. When bombs did fall on Berlin during the war, these air-raid shelters in the depths of Templehof would be filled with people. The shelter rooms still contain original paintings from the war that were designed to distract children from the chaos above, looking at the gaudy Wilhelm Busch sketches, it is difficult to see that they would do anything more than add to the terror of the poor children.

During their time occupying the building, the Americans set up various function rooms. There was a bar, a bowling alley, a full size basketball court, a disco area, a supermarket, a cinema and there was a baseball pitch on the pan. In 1962, the Americans removed a 5-metre sculpture of an eagle perched on a globe from the main terminal roof and replaced it with radar equipment. The eagle’s head now sits outside the terminal building.

Templehof’s capacity was stretched to the limit in the 1960s, and operations at Templehof were suspended after the construction of Tegel airport in West Berlin’s French sector in 1975. ​In 1990, after the fall of the Berlin Wall, Templehof started to operate domestic flights once again. In 1993, the US Air Force handed the airport over to the Berliner Flughafengesellschaft, and it was used on and off for commercial purposes until November 2008.

Berliners do love their Templehof, in 2011, plans were mooted for a huge development on the site, proposing building 5,000 houses on the site, as well as commercial areas and offices. However, the Templehof Field Initiative gathered enough signatures to hold a referendum, the result, 65% voted to keep it as it is. Well, the airport, after all, is an old war-time hero, it saved the city, kept it breathing when the Soviets tried to strangle it.