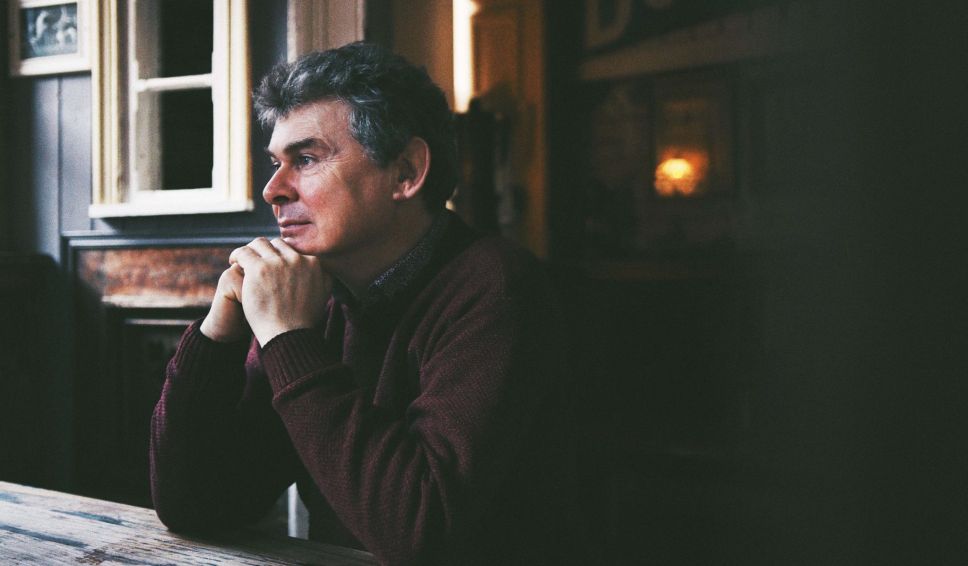 He is Christy Moore’s favourite songwriter. Damien Dempsey calls his songs the heart and soul of Ireland. John Spillane is obviously a tad mighty. He has written over 200 songs and is a compelling live performer. Approaching Dingle, at the hairpin bend at Baile na gCapaill, you’d often see Páidí O’Sé’s (he of just the 8 All-Irelands) sign – John Spillane! Live Tonight! 9pm, Fáilte! That was the plan set for the evening.

“The craic with Páidí was unbelievable,” John laughs, “I would be coming across from Cork and I would see his signs. I played all the long weekends down there for the last three or four years of his life. I’d stay with his aunty across the road. Páidí would say the most important thing about putting up the posters is taking down the posters.

“We’d get into the car about one o’clock in the morning, flashing through the dark of the Dingle Peninsula at one hundred miles per hour, taking the posters down. One of his posters was outside Ventry graveyard. Páidí explained, ‘It’s Holy Saturday John, they visit their dead.’”

I take it John knows the craic with the Begley brothers down the road from Páidí’s in Baile na bPoc.

“Oh, they are some men,” he enthuses. “I was over in Denmark at a huge folk festival. It was three or four in morning in the bar, and the place was jointed, people talking, drinking and laughing. And you have the two Begley brothers, Seamus and Brendan, standing up and singing songs like soldier, and nobody listening to them and they not caring.”

With John, you get the feeling there isn’t a parish in the country where he doesn’t know a head or two. In a series produced for TG4, Spillane an Fánaí, he wandered Ireland writing songs about towns.

“It was supposed to be about the town and not about me,” John grins. “I took over my own TV series from the inside and turned it into a big songwriting workshop.”

Proper bardic stuff. Indeed, John has a belter of a song on his new record about Turlough O’Carolan, the blind harper, the most famous bard of Ireland.

“I had the shingles,” John recalls. “I was going to New Zealand and Australia to do a tour with Mick Flannery. I was nervous about the trip; the shingles is a nasty old thing. I went to a seventh son from Mohill for the cure, where I saw the statue of Turlough O’Carolan, the most beautiful statue in Ireland, a brass harp with no strings on it. I was supposed to write a song about Mohill but it became more about Turlough.

“The definitive book about him is Carolan, The Life, Times and Music of an Irish Harper by Donal O’Sullivan. Turlough traveled around with a guide on two horses, they would be well steamed up and one of them blind as a bat. Robert Graves has a theory that what makes Ireland different from all the other countries in the world is that we had the bardic schools, creating a caste of professional poets.

“The same exists in the Griot tradition in West Africa. It is a caste. You have to be born into it. Ireland had a standing army of 15,000 poets. That’s pub talk, but it’s probably true.”

I enquire about the music scene in Cork when John was coming up.

“Jimmy MacCarthy, he is seven years older than me, he was on fire, very passionate, very intense and very brilliant,” he reflects. “His songs weren’t coming from Irish folk, they were more pop. He was very inspiring to me. Rory Gallagher would play Cork once a year. Those gigs were unbelievable, he would play to the crowd, they would be sweating and rocking. Then he would take out the mandolin and do ‘Going To My Hometown’.

“Later, I had a conversion, I went from Sir Henry’s hard rock café to the Phoenix Bar. The Phoenix was all trad. I was a big fan of Planxty and then I saw Dolores Keane, she was the best thing I had ever seen. Moving Hearts, too. Irish trad is the best music in the world, it does not belong to the past, it has not happened yet, it is going to be so huge in the future –  it has the capacity to become the new rock and roll. If you get Irish trad, you really get it.

“The trad I prefer is without accompaniment. There is an album by Mick O’Brien and Caoimhin Ó Rahalligh called Kitty Lie Over –  if you put a guitar chord behind it, it wouldn’t make it any bigger, it would diminish it.”

“I was in my thirties and he was back in Cork,” John explains. “I read his Song For A Poor Boy, that’s his masterpiece. His poetry is romantic and dashing. The first time I did ‘The Madwoman Of Cork’ in the Lobby bar, everyone was laughing. I said, ‘Why are ye laughing?’ I was annoyed because it is a very dark song, but they thought it was hilarious. I had the honour of singing Paddy down into the flames at the crematorium with that song and the line, ‘When I die, believe me, they’ll set me on fire.”

John’s new record, 100 Snow White Horses, contains some of his best work, including the transcendental ‘Billy In The Sky’.

“I wasn’t even going to use it,” notes John. “My producer John Reynolds said there’ll be no record without ‘Billy In The Sky’. I first met Billy Doyle at a gig of mine in Abbeyleix, he is a helicopter pilot. I was playing Inis Mór, the night before I had a gig in Ballina, and Billy offered to take me across in the helicopter. Three minutes later, we were over the Burren and from there we sailed down onto Inis Mór.

“I wrote the song in gratitude. It has another level too: my father, who died when I was two, was called Billy. John Reynolds suggested the Sam Spade-style spoken word part. Natasha Atlas did a stunning vocal on it.”

No less a man than Brian Eno, meanwhile, created the record sleeve for the new album.

“We were walking in Hyde Park on a summer’s day,” says John.  “I told him I was calling the record 100 Snow White Horses and that the cover would have a picture of a white horse. He thought that too literal. He had me take a picture of my shadow and he workshopped it. So yeah, he sprinkled some of his Eno magic on the record, like.”