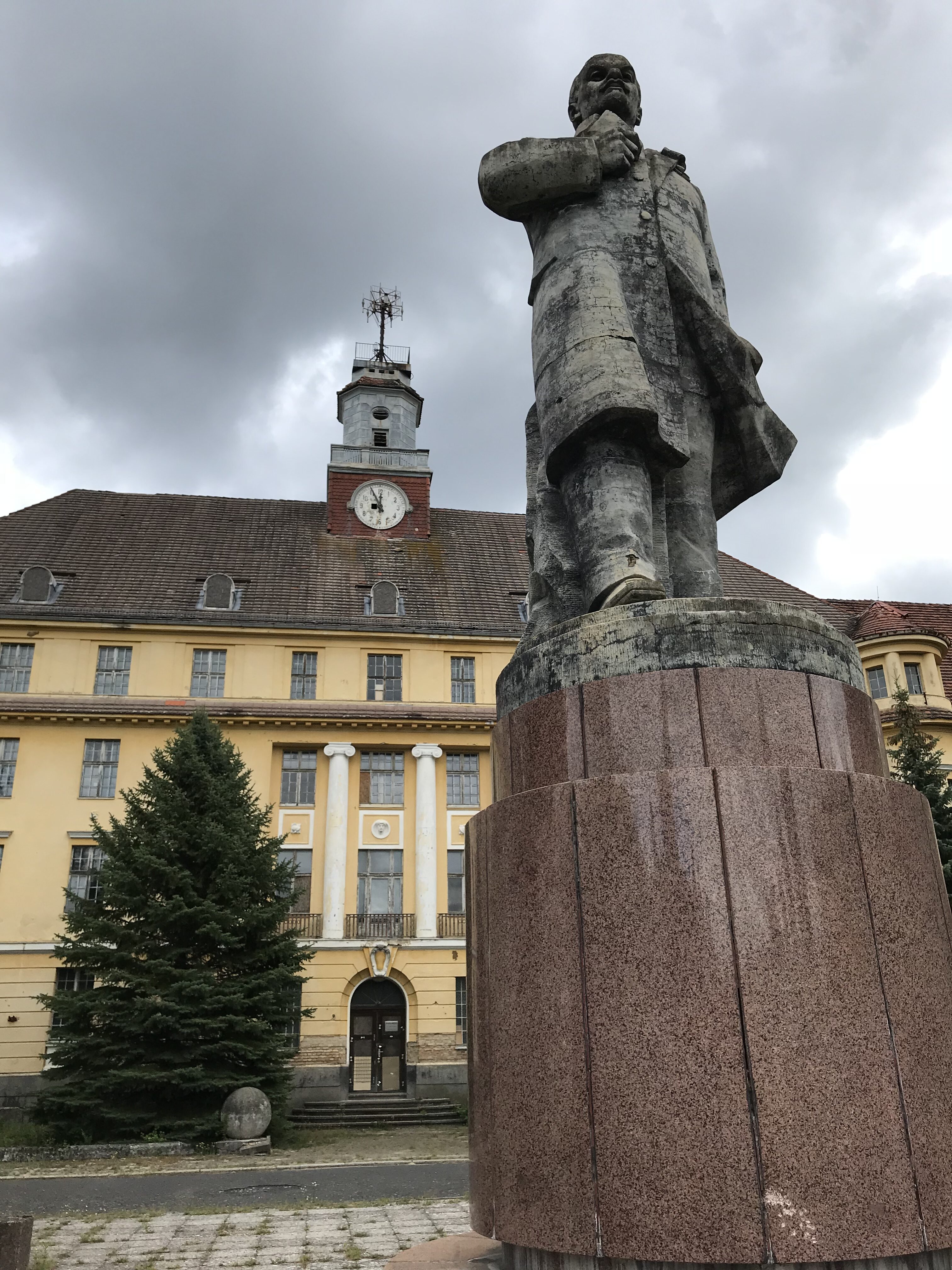 Vladimir Illyich Lenin remains at his post, the last Soviet in The Forbidden City. Once, there was seventy-five thousand of them, back when Wunsdorf (located, approx 25km south of Berlin) was The Red Army’s largest Soviet military camp outside the USSR. What a strange sensation it is, wandering around this gigantic complex alone, a landlocked Marie Celeste, hearing the voices of times past when hordes of Russian soldiers nested here in anticipation of any dissent from the German population or to quell any Western forces’ incursion. Or the voices of times past when the Nazis occupied it before them or voices of times past when the Prussian military barracked here.

It is still a restricted area, so working off a tip from the excellent Abandoned Berlin, I contacted the caretaker, Jurgen, who met me at the gate and allowed me to step into what was once known as Little Moscow where once trains departed daily to the real Moscow. It makes you feel lonely, wandering alone on this sixty thousand acre site with buildings so large that you get lost inside them and with some difficulty retrace your steps to find your way back out.

Obviously, the Soviets did not build it (with the exception of the bizarre space age nightclub clawing to the back of the Officer’s House), its history stretches back to 1871, when the Prussians established a shooting range here. By the start of World War I in 1914, it had expanded enormously to become the largest military base in Europe.

During the War, the site doubled up as a POW camp. There was a large population of Muslim prisoners, the area where they were held was called the Crescent Moon camp and included Germany’s first mosque.

After World War I, the Army Sports School was established at Wunsdorf and remained in use until 1943. While all other other nations competing in the 1936 Olympics trained at the Olympic village in Elstal, the German team honed their skills here at Wunsdorf.

The German Olympic team were not alone here, they were rooming with the Third Panzer Division who moved in during 1935.

Obviously, the Wehrmacht knew what they were really here for. In March 1937, work began on a state of the art subterranean communications centre named Zeppelin with 3 metre thick walls. The following year construction began on Maybach I & II -bombproof bunkers which were disguised as ordinary rural homes. They also built nineteen strange looking aerial defense bunkers that resemble NASA rockets; the idea being that bombs would slide off them and explode harmlessly below. The German Supreme Command moved in, days before the invasion of Poland. The Nazis’ entire second world war campaign was guided from the Zeppelin underground communications bunker at Wünsdorf, providing direct contact through telex to the fronts at Stalingrad, France, Holland and even Africa. Incidentally, the resistance movement within elements of the German High Command evolved at Wunsdorf, among men such as Wagner, Fellgiebel, Stief and Hitler’s would be assassin Stauffenberg.

The Soviets took the complex in April 1945 without a shot being fired as the Germans had already abandoned it. Soviet Marhsal Georgy Zhukov made Wunsdorf his headquarters and the Soviet High Command remained here until their complete withdrawal in 1994. Locals were moved out and the area became restricted, East Germans were not allowed near it, it became known as Die Verbotene Stadt, The Forbidden City

Up to seventy-five thousand Russians including women and children called Wunsdorf home at one stage. It was self contained with schools, supermarkets and businesses. Relations with the East Germans were supposedly good, and the base was a huge boost to the local economy. Indeed, East Germans bribed their way onto the base to purchase goods that were unavailable and prices were cheap as the Russians did not pay VAT. But their presence was ominous, their capacity included been the muscle, in case of dissent, such as was the case during the 1953 uprising.

And then in early nineties, they left, leaving Little Moscow abandoned. They skedaddled rapidly, leaving behind 98,300 rounds of ammunition, 47,000 pieces of ordnance, 29.3 tonnes of munitions and rubbish. Shops were left full of electronics, radios, TVs and fridges. Families were in such a hurry they couldn’t take everything. Houses were full of domestic appliances. Even pets were left behind. Now, it’s a little piece of Russia rotting and withering away as the surrounding forests loom python-like on its lonely edges. Meanwhile, Lenin waits and waits and waits and waits…