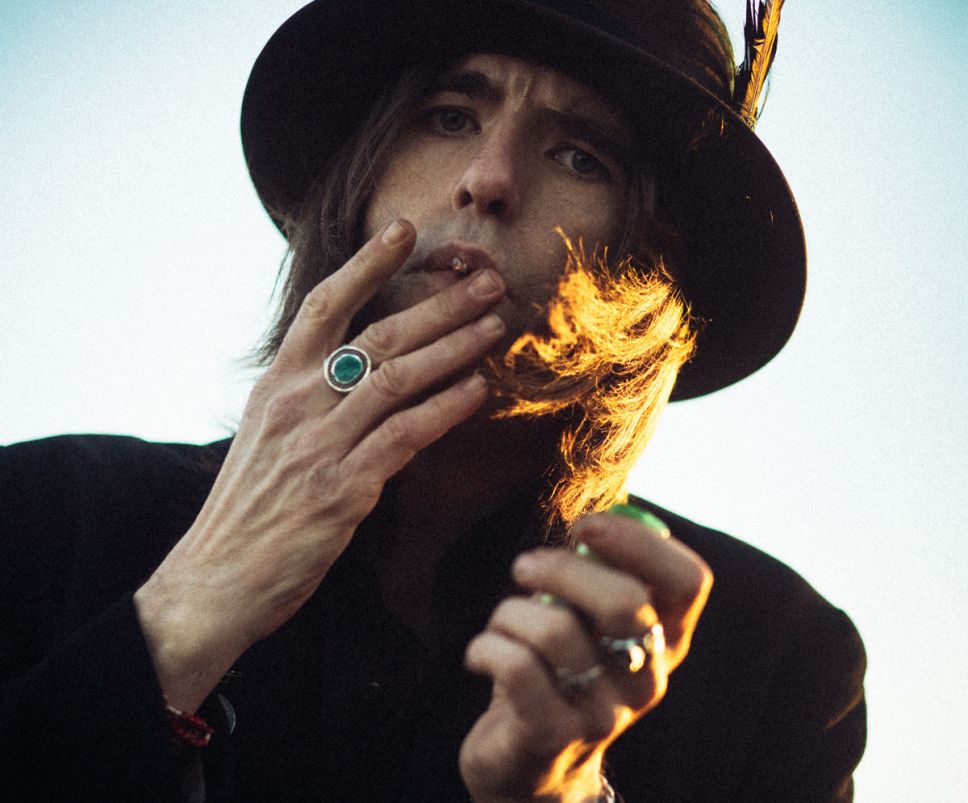 PUBLISHED IN HOTPRESS ON 27 NOVEMBER 2020

Happy Thanksgiving, From Longford with Love…

There is a road that leads from Drumlish to Ballinamuck in the County Longford that they call the Bronx. For centuries, many born here, joined the thousands sailing west and settled in that New York borough across the Harlem River.

Along that road, in a two-hundred-year-old house, John Murry and Hotpress are swapping tales about Galileo, John Prine, Paul of Damascus, Billy Joe Shaver, Constantine the Great, Orson Welles and the Catholicism of Graham Greene. Outside the darkness of Longford is blowing a gale. The wireless crackles, the faint strains of Shannonside FM, we strain and listen for Declan Nerney. It is late and everyone else has drifted away to sleep in the big house up the road.

We have just taken part in what nowadays is a rare pursuit – a gig. Billed as ‘John Murry’s Thanksgiving Lockdown Live’. It was broadcast by and from Live Transmission Records. We were an audience of four – the Cronin brothers, Mick and Johnny capturing the sound, Pete Kingston capturing the visuals, and Hotpress scribbling about it.

The gig takes place in an abandoned two room cottage at the back of the Live Transmission Records compound. Decades ago, it was the home of Frankie Joe Walsh and his wife Nora. The room is warmed by a huge fire beside which sits John Murry lit by a melee of fairy lights tacked above the mantelpiece. Above him is a shelf cramped with pictures and statues of Jesus Christ and the Madonna, the Child of Prague, crucifixes, scripture candles and rosary beads. The curtains of the Walsh’s still hang, although the windows and much of the roof are gone. A spade is placed against the door to stop the wind, ghosts and the cold creeping in.

“What would Frankie Joe Walsh make of this?” I ask Mick Cronin.

“Turning in his grave,” he says, “as a boy, you would be terrified to come in here.”

There are many bizarre twists in these strange times. None more so, that tonight in the outlaw lands of Longford, takes place one of the few gigs in the country. To paraphrase John Peel, it was a real pleasure to be drinking a beer, listening to a musician hitting his strides. We watch with foolish grins and count ourselves very fortunate.

John Murry wears shirt and waistcoat beneath a tweed blazer tacked with badges and brooches. I spy the Cronin badge of ‘She Saves’ – the Mother of God with a skipping rope – the Virgin does well around these parts. John wears his hair long, Native American style, black jeans from which a red scarf hangs Springsteen style, brown boots. His Jesse James hat with feathers sits on top of one of his guitars. An overturned wooden Macardles’ beer box holds a pouch of tobacco, a packet of Marlboro, a silver case with papers, glass bottles of Coca-Cola, scribbled notes from fans in America, France and the UK who have paid for dedications. Fingers bejeweled, wrists wrapped in bracelets, he looks a true child of the Mississippi Blues in exile in Ireland.

Later on, I angle to get to talking about John’s new record, even reciting Homer’s incantation to the Muse. He looks confused. Mississippi men don’t wax lyrical about the Muse. They are just hungry for truth.

So, I guess I’ll do what I am here to do and write about the gig. He opens with a track from his hometown of Oxford, Mississippi – Blue Mountain’s ‘Slow Suicide’, singing “Obscene desire of my obsession/I tried to make her my possession/but love and lust must live free/Now the spell I threw, is coming back to me.” He slices his songs with Townes Van Zandt style observations about the ticks of local merchants, the dark Labrador that haunts the surrounding apple orchards, the state of five o’clock sunsets – “Did that happen this year or was it like that forever?” he asks, no one answers.

His songs are as home in the badlands of Longford as in the Deep South. On ‘Wrong Man’, he tells us, “I’m the wrong man riding shotgun on your murder mile.” He follows it with another one from his second record – ‘A Short History of Decay’ called ‘Come Five & Twenty.’ He drawls “Death rattled in the chest of our homemade circus/The tightrope went slack/Those days are probably best left forgotten/They ain’t coming back.”

He sings covers that you might expect to lighten the mood – Smokey Robinson and the Miracles’ ‘Tears of a Clown’, Jimmy Ruffin’s What Becomes of the Broken-hearted?’ But rather they make you think about those songs like never before. It’s a talent John displays on his excellent new EP, Tilting at Windmills with songs like Robert Palmer’s ‘Johnny and Mary’ and ABBA’s ‘Super Trouper.’ He turns them into terrifying sad old songs. They settle well around these parts. Outside sit decaying ballroom of romances, the pubs of Drumlish lie silent, a dog barks at the moon and John Murry howls, “Now, what becomes of the broken-hearted/Who had love that’s now departed?/I know I’ve got to find/Some kind of peace of mind/I’ll be searching everywhere/Just to find someone to care.” Even when he segues into Buddy Holly – “Every day it’s getting closer, going faster than a roller-coaster.” It sounds like the end of the world.

John doesn’t provide us with titles. He flicks from one song to the next without break. His capability of interpreting other people’s songs as his own can cause confusion. There are songs I don’t recognise, they may be taken from his upcoming record. I scrawl down lyrics – “Even in sleep, she’s with me, the bed is cold, I must be dreaming …pray to the Morningstar that your dreaming of me too.” There is one I know from the Canadian singer Hayden whom he dedicates to Martin Furlong. There is a short one which ends abruptly – “I see no reason to write another word about you.” Then a lyric that only a son of the South could write, “Ten miles north of Jackson stood a tower, 100,000 watts of power, in the parking lot after school, Lynyrd Skynyrd Nation rolled the notch to 102.” He sings – “Oscar Wilde came here to make fun of you, to dress well and play bridge, why the hell can’t I do the same, to these architects of indifference.” Lamenting, “if I didn’t have to hustle all these second-hand stories”

The end of his set is stacked with songs from his universally acclaimed record ‘The Graceless Age’. Powerful in any place, they knock you over in a setting like this, played just on scratching guitar a few feet from your face. Howling on ‘Southern Skies’ – “She knows my face/my broken body/ And I still see it in her eyes/that crucifix that bound our bodies.” Warbling on ‘The Ballad of the Pajama Kid’, “they told me to forget you/they never told me how/I sleep here in the parlor/with my boots still on my feet/living down in the darkness.” On ‘California’ he bleats, “I’ve beaten my brain with benzodiazepines/Momma won’t tell ya that love is a monstrous thing”. On ‘Things We Lost in the Fire’, he whispers, “Now to kill your ghost I lay down on this couch/with chiva in my blood/And your belt in my mouth.”

He croons Dave van Ronk’s, ‘Hang me, Oh Hang Me’ and recites Paddy Kavanagh’s, ‘If You Ever Go to Dublin Town.’ He tells us, “Texas – all hat no cattle, this is a song about heroin and this is the end of the night, this is Little Colored Balloons.” If a man like John Murry has a killer cut, Little Colored Balloons is it, a song to release your soul to – “Yeah, I tried to wash it off/Red as Southern clay/Blood-red as Mississippi clay/And yes, it remains/ Goddammit, it still remains/Where is Pilate’s water/Tell me! Where is Pilate’s water?” He hums some Lennon and then wishes us, “Happy Thanksgiving, From Longford with Love.”

Back in the house, dawn approaches. We warble about the differences between Hill country blues and Delta blues, bad city planning in San Francisco and U2’s October. Rendered almost inarticulate, I squirrel away to the adjoining recording studio. I write about the night under a giant effigy of Elvis and the benevolent smile of a chipped Virgin Mary. Longford is heaven (on a night like this).