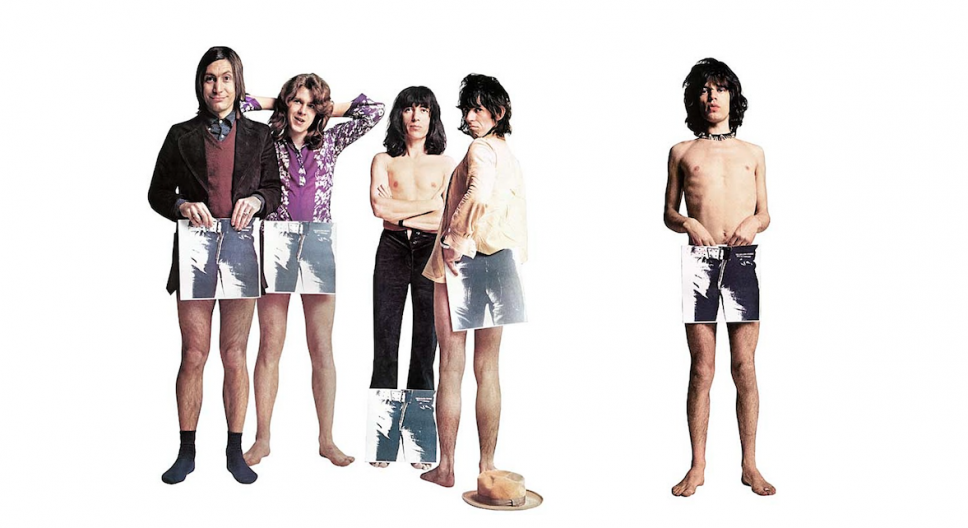 “Sticky Fingers is three quarters of an hour of apeiron mood wrapped in Warhol’s package.”

I never met JP Donleavy, neither did Hunter S Thompson. Bizarrely, I had a better chance. Donleavy lived on the shores of Owel, a lake that metamorphosed children into swans and stuffed High Kings of Ireland into barrels and drowned them in its bottomless black waters. Reading the gateway of Fear & Loathing opened the way for me to a full-blown addiction to The Gingerman, Donleavy’s masterpiece. Hunter said, “without The Gingerman, there would have been no Fear & Loathing in Las Vegas.” I humbly agree.

I drove a heap of junk, loved that piece of junk, roamed the county in it. I often shored up at the Sluice House, that which fed the black waters of Owel into the Royal Canal, that plodding Scylla embalmed by the first reader of The Gingerman – Brendan Behan in his Quare Fellow with brother Dominic’s shattering Triangle.

He used to walk by me, JP Donleavy did, walked by me while I read his books. He was always polite, always bid me the time of day, I never spoke to him. So many chances I had to speak to the man, and I never did, too shy. Hunter S Thompson had written to JP from Big Sur, California where he had moved to meet Henry Miller. He was searching for a mentor, an inspiration, he was audacious enough to write to Donleavy, all the more so, since Donleavy was so off the radar.

Jesus, what has any of this got to do with Sticky Fingers? Well, JP Donleavy got me into the Rolling Stones, kind of. In the early nineties, Baggy and Grunge were far more appealing circus animals than the Rolling Stones of Steel Wheels. Then I heard that Mick Jagger had once visited Owel to pay homage to JP Donleavy. The fact that Mick Jagger was in thrall to JP, I found compelling. Still, I didn’t go rushing out to buy Voodoo Lounge from our local record store, the achingly named Tupelo records, instead I borrowed Goat’s Head Soup from a neglected collection. Its ‘Winter’ got me hooked, the beginning of an obsession with all things Stones.

To be honest selecting a favourite from Beggars Banquet, Let It Bleed, Sticky Fingers and Exile on Main Street is like choosing your favourite Beatle, it changes depending on the level of sobriety. Gun to the head, I’d take Exile, but I know that is maestro Pat Carty’s Buddha’s tooth, so hands off. Since it’s not yet sunset, I choose the record made in the dying months of the sixties and first year of the seventies – Sticky Fingers.

The Kabbalah of open G Tuning miraculously descends upon ‘Brown Sugar’ or just five strings, two notes, two fingers and one asshole, depending on your appreciation of such matters. ‘Brown Sugar’, that changeling, suffers visions of drunken relative’s boogie dancing at weddings. Hey, but they are only human. That opening blues-rock riff, Bobby Keys’ bitching sax, Bill Wyman’s throbbing bass and Ian Stewart’s barrelhouse piano, would make the mummified dance. It drips Let It Bleed darkness, but deviously, as when mumbling Latin hymns, most don’t know that they are humming to – Gold coast slave ship bound for cotton fields/Sold in the market down in New Orleans /Scarred old slaver knows he’s doing alright/Hear him whip the women just around midnight – crikey.

Even tire kickers of the Rolling Stones know ‘Wild Horses’ by osmosis. For me, it was the tip of the country folk iceberg, it opened that infinite world which I traipse drunkenly through often. Pristine guitars, honkytonk piano – the track is doused in Country – but Jagger’s vocal is Blue as the moon, he steals the track back from Gram Parsons, that’s okay, it’s the Stones to steal. Perhaps it is more of a trade – Gram has some say in the Stone’s tongue in cheek caper on ‘Dead Flowers’. It is preposterous, but in a Fellini manner, it is cinematic, and Parsons is in there somewhere and I like that – “Well I hope you won’t see me/in my ragged company/you know I could never be alone.”

The Stones possess a mythology as rich as the Mahabharata and the parable of Muscle Shoals in December 1969, is one of its most compelling. The Stones, back touring in the USA for the first time since 1966, were pioneering the arena tour. It would be Mick Taylor’s baptism – he had only performed one gig, the free concert in Hyde Park – Brian Jones remained in swinging London, forever young. The tour was chaotic, run by hustlers, the Stones strolling on hours late perhaps coming from more enticing engagements. The counterculture was in full swing, the audience – going to more pressing engagements – smoked dope and tuned in. Arguably, the Stones had their finger more on the pulse of the collapsing counterculture than many of their counterparts.

Altamont was Armageddon on the horizon. But as a Gethsemane, the Stones, red hot, wanted to record and wanted to record in Memphis. Stanley Booth who was travelling with the Stones contacted his buddy Jim Dickinson looking for somewhere for them to record. Dickinson suggested the anonymity of Muscle Shoals. The Stones landed their jet on a nearby strip and entered that old coffin factory, Muscle Shoals Sound Studios in Sheffield, Alabama where they cut three tracks that would appear on Sticky Fingers. ‘Wild Horses’ forced Ian Stewart’s abandonment of play – Ian possessed a rigid refusal to play minor chords. Jim Dickinson – he who substituted for him on it – recalls the ridiculous ability of Mick Jagger scribbling ‘Brown Sugar’ lyrics in less than an hour, both him and Richards standing at the mic, passing a fifth of bourbon between them singing lead and harmony. I dig that image – Jagger and Richards away from all the madness, alone in Muscle Shoals, a Circean bridge from Edith Grove to the 1970s that they would dominate.

‘You Gotta Move’ was the third track cut there. Taylor’s electric slide on it is the sound of the Delta, Taylor was still twenty, which would make anyone feel sickly inadequate. The song reworked Mississippi Fred McDowell’s gospel track as blues, the Stones had been knocking around with it since 1969 and a version is on the Stones 1970 live album Get Yer Ya-Ya’s Out.

The rest, excepting ‘Sister Morphine’ (a welcome hangover from the Let It Bleed sessions) was recorded in the Poeish surrounds of Stargroves and the cherry was put on top at Olympic studios. Ry Cooder’s scratching Fender Stratocaster on ‘Sister Morphine’ hints at a path almost travelled, if he had become a Rolling Stone. Marianne Faithfull gets a rightful credit here, golly the Stones, so many subplots in the family drama.

Jagger’s opening howl on ‘Can’t You Hear Me Knocking’ – “Yeah you got satin shoes/yeah you got plastic boots/Y’all got cocaine eyes” – is much copied, never bettered. The track has almost all the Stones’ super sidemen – Billy Preston, Nicky Hopkins, Bobby Keys and Jimmy Miller – present and accounted for. Richard’s chopping broadsword chords are jaysus Dionysian, before the symphonic entrance of Key’s tenor saxophone, Preston’s deft Hammond touch and Rocky Dijon’s congas. Taylor caps it with a Damascene swing, sprinkled with Charlie’s Latin touch, you can dance that solo on the way to any hell. That track man, is a seven-minute storming of the barricades, and a reminder that Chuck Berry never ceases to haunt the Stones.

If it is Castor, ‘Sway’ is Pollux – Taylor’s Duane Allman style rapier guitar slashes through Watt’s smirking drums with Hopkin’s tinkling at the Siberian end of the piano, Key’s sax rages against the dying of the light, before giving way to Jagger’s bay. Watts’ intuition is an Ariadnean thread. And yet it is Bill Wyman’s bass that is the most compelling aphid in the soup, anchoring the titanic track while Taylor and Jagger man their respective trenches for a good old shout and response. It’s far from the only Memphis soul trick. Stax horns on ‘I Got The Blues’ channel Otis and Pickett. Billy Preston conjures Bach, Jagger’s soul range is searing, Charlie Watt’s Al Jackson Jr. backbeat makes one think of reincarnation and quantum universes.

‘Bitch’ is the record’s Nick Bottom – a joyous bitching romp, Jagger faux sloppy – I’m feeling hungry, can’t see the reason/Just had a horsemeat pie. With all the frenzy surrounding the Stones, it almost slides past that this was the first record that Mick Taylor fully featured on and so it is on Sticky Fingers that the ancient form of weaving evolved. Richards drifted in and out of Stargroves, strolling in once shoeless to insert the roll into ‘Bitch’ while Wyman drags the entire ensemble including Watt’s snare into the funk.

If ‘Sway’ was the Jagger Taylor foreplay, ‘Moonlight Mile’ is full on consummation. Jagger’s acoustic tangling with Taylor’s Middle Eastern guitar. It was the last song recorded for the album, sun would soon be up, Jagger allowed the mask slip, none of the old Stones present. Buckmaster’s string arrangement is glorious here, the lyrics are echoing of John Donne, Wyman’s bass in the shadows is wondrous, Watts’ drums are operatic. The track captures the Byronic wasted beauty, anguish, pain and delight of the record.

Sticky Fingers is three quarters of an hour of apeiron mood wrapped in Warhol’s package. A year later the Stones would deliver that most elegantly wasted of masterpieces – Exile on Main Street – but that’s another (Carty) story.