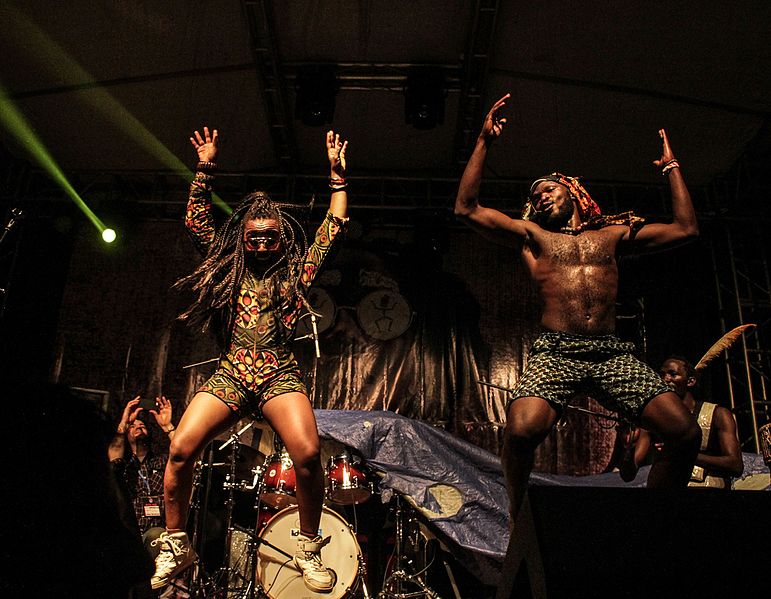 I knew what I opened the studio for. I was looking for a higher ground, for what I knew existed in the soul of mankind.” Sam Phillips

Man, there is something happening in Kampala, something really special, in a scene reminiscent of Memphis in the 1950s; Liverpool in the 1960s; London or New York in the 1970s, Detroit or Manchester in the 1980s, there is a scene being created in a community in Kampala that is raw, original and like nothing that has gone before. The epicenter is the label Nyege Nyege Tapes and there are two men are at the center of it – Arlen Dilsizian and Derek Debru.

The music was here, they didn’t create it, but man did they unearth it and then build upon it. Since its creation in 2013, Nyege Nyege has grown rapidly. In 2015 they opened a recording studio in Kampala called Boutiq Studio, a place for local, regional and international collaborations. That same year they held the first edition of their annual festival in an abandoned resort in Jinja, by the source of the Nile. And in late 2016 they started Nyege Nyege Tapes, a label that is releasing thrilling, mostly East African music, ranging from northern Ugandan electro acholi to singeli from the streets of Dar Es Salaam.

You get the idea, Nyege Nyege is something very different. My introduction to the label began after I stumbled across Hibotep’s stuff on Sound cloud and so I entered the maze of Nyege Nyege Tapes. I am so interested in the scene developing in Kampala, like Acid House in Manchester, bands and artists are driving a scene towards a youth that is hungry for identity, for a break from the past. I had written a number of pieces on artists on the label including Jay Mitta, Otim Alpha and Nihiloxica before I contacted Derek Debru. I was delighted when he agreed to do an interview with me. It was difficult to schedule, Derek is always on the move, after a number of weeks, with Derek back in Kampala after being in Gabon, we spoke, I could hear the hum of heat and the click clack of crickets, he could hear the Leeds downpour and Christmas cries of King Edward Street traders.

I started with asking him about the beginning of the scene and what it was like.

“I have lived in Uganda for the last ten years, so has Arlen. I was working with bands, organizing parties, then I met with Arlen and he was running Kampala Film School, we started throwing parties in more alternative spaces, warehouses. Then jam sessions, electronic music, African music, African electronic music together with percussion and MC’s every Wednesday after which we would screen films.

Running out of funds for the film school, they decided to rent out a villa and have resident teachers, that is how they got their first space. They then began to invite musicians for residencies, first was DJ Salut an underground Tokyo House DJ. The parties starting to get bigger and then they stumbled upon the sounds of Northern Uganda, met with Otim Alpha and Alai K, a resident producer from Kenya, villa became a hub for music, threw a little festival and presented the first three tapes, that was Disco Vumbi, Otim Alpha, Ridlor, AK??? Got picked up by, Manchester retailer BoomKat has release of the week.

The faced the old chestnut, the scene needs to discover the unknown sounds, the first time Salut played a vinyl house set, every single person left the venue, six month later everyone would know where he was playing and he would have a following.”

Other house sounds, including Afro House came after that moment, we had hip hop, a lot of reggae in the underground scene here, so we would mix it up, bring a lot of people from outside Kampala, Otim Alpha, DJ Henry from northern Uganda. We wanted to be a crossroads of genres without pigeonholing ourselves in any one sound. “Kampire will tell you that she had certain gigs in the beginning where people would tell her to get off the decks, they would plug in their phones instead, most recently when Slickback came to play Kenya he got booted off the decks just fresh off a Chinese tour and European tour, so, space for alternative things is a bit small sometimes and people can like what they like, but lucky there are enough people that are bored by the usual stuff and are just ready for new sounds and they are the sort of people that coalesced around us.

And they are hungry for more, a lot more, Derek tells me,

“In terms of finding music, our door is always open, my Whats App is always open, as is Arlen’s Whats App, our Facebook page, anyone who submits anything we always check. At the same time we are always acutely tuned in to what is happening on the Continent or India, or Indonesia or America or the diaspora in Europe. And on the ground, every town, every tribe has their own sounds, it is really interesting to dig into that also.Most recently I was in Gabon, a lot of amazing music is coming from there, we will have a few releases coming from Ghana also. In Kampala we are interacting with the more left field producers and then we have all the projects which we commission or collaborate on or incubate in our own space. So people like Slikback or MC Yallah, they are projects which we brought through years of hard work.”

Dig into this label man, it translates roughly as “the feeling of a sudden uncontrollable urge to move, shake or dance”, and you will, you will. Derek Debru and Arlen Dilsizian are mining mighty sounds, man, this label is gold.