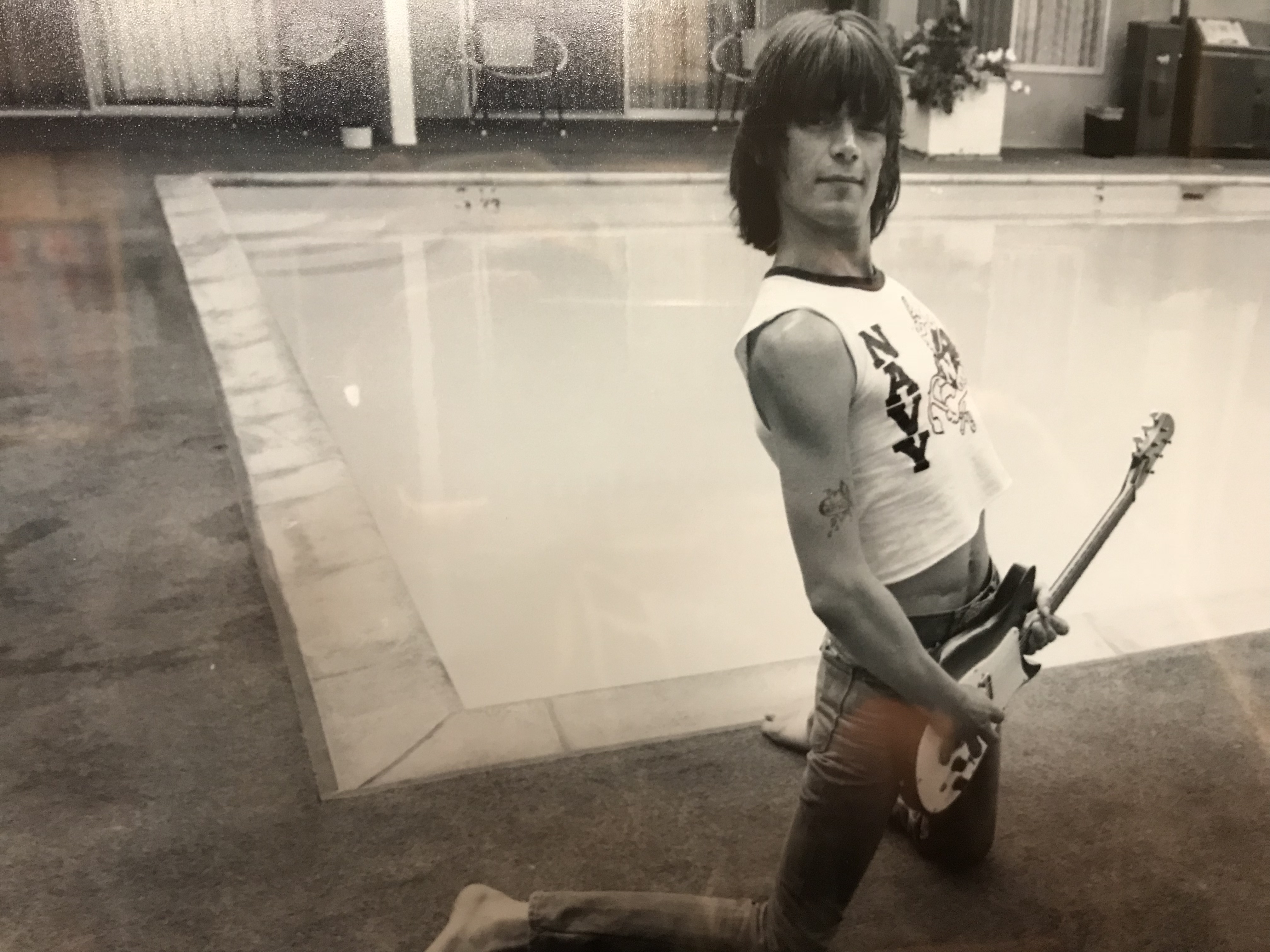 I was chatting on the phone to my friend Johnny, telling him about how I was getting on in Berlin and he asked me, ‘have you been to the Ramones Museum yet?’ Surely he was mistaken? A Ramones Museum in Berlin? I never heard of it. ‘Sure, there’s one there, it’s the only one in the world, it was in Mitte but I don’t know where it is now.’ Now? Why where was it before? ‘It moves about a bit.’ Really? ‘Really.’ I hung up, not fully sure if he was having me on or not. I had never seen it or heard of it, but that’s cool, Berlin’s a big place. But why would a Ramones Museum be in Berlin? Why not in New York? I forgot about it until I stumbled upon it. It’s in Kreuzberg now. On Oberbaumstrasse. Just off Oberbaumbrucke.

I looked across a road and it was just there, the Ramones Museum in Berlin with Link Wray clone dudes draped across the outdoor seating drinking beer, Sheena Is A Punk Rocker blasting out onto the early night street. In under the Gabba Gabba Hey sign, is a bar behind which a girl tells me its five Euro in, I look at the small gap through which the museum lies, she tells me that five Euro is life membership, that I can come back as many times as I like, forever. I pay and am given a badge which I affix to my Osprey and in I go not expecting too much.

Like Lucy going through the wardrobe, it’s a portal to whole world, a Hail To The Freaks Ramones world. It houses over a thousand original original artifacts spanning the band’s career from 1974 to 1996. The collection includes posters, unpublished photos, signed memorabilia, stage worn clothing, instruments and amps, original tour-shirts, hand written letters and song lyrics. Man, it’s really something.

You are taken from their early childhood- and school days in Forest Hills to early gigs at CBGB’s and Max’s Kansas City, through the composition and recording of their 14 albums and their nonstop touring for 22 years across over 2,200 gigs. You can watch their film, ‘Rock ‘n’ Roll High school’ in what is referred to as the cinema but is more like a cosy 1970’s Forest Hills sitting room.

There is some weird stuff in here – Dee Dee Ramone’s credit cards and autopsy report, Joey Ramone’s gloves, his wrecked mic stand, Marky Ramone’s sneakers, CJ Ramone’s blood stained finger tape. An enthusiastic girl comes in yelping, very excited, I guess she’s right to be, this is the greatest room on the planet for a Ramones’ fan. I lose myself late into the evening in those rooms containing The Ramones.

What helps is that The Ramones were a merchandise machine. Not only did they come up with countless designs for new tour shirts, they were very inventive in terms of new income sources – frisbees, socks, shorts, hats, pins, flags, posters, photos, guitar pics, drum sticks, and much more. Pretty much anything the band ever sold at their merch can be seen in here. Seeing more than 50 different t-shirts from various tours, eras and counties in here – I get to understanding the amount of Ramones T-shirts you see out there, all around the world, on all shapes and ages of people.

This series that I am writing is about Vanishing Berlin, things that were here and are now gone or those that remain but are utterly changed. But why are the Ramones here? Sure Dee Dee spent a lot of childhood and early adolescence in Berlin and there is The Ramones’ song Born to die in Berlin which includes the lyrics –

But surely if this place was supposed to be anywhere, it would be New York? So, why Berlin?

The Ramones Museum was born in summer 2005, when founder Flo Hayler moved in with his girlfriend and she said it’s either her or the Ramones junk on the walls. Basically, it was just a stupid idea to move eight boxes of Ramones memorabilia to some friends’ basement two blocks down the road, throw some paint and a few dozen wooden frames on the walls and call the joke a Ramones museum. Due to rent increases and need for space, its moved about a bit, I think this present incarnation is its fourth.

Man, it’s become more than a museum. It is the beating heart of The Ramones. It received the the blessing of the living members of the group, Marky and C.J. Ramone with the former stating, “I’m very flattered that another country will help keep the Ramones legacy alive.” In addition, serious pedigree has assisted in its curation including Arturo Vega, designer of the Ramones logo, attendee to almost every gig they ever performed and referred to as ‘the fifth Ramone’; Monte A. Melnick, Ramones tour manager and author of the book ‘On The Road With The Ramones’; Danny Fields, the Ramones manager; Beverly Mulligan, Dee Dee Ramone’s sister and his mom Tony.

Joey died in 2001, Dee Dee in 2002, Johnny in 2004, stripped off The Ramones, the Ramones drifted away. Tommy too, in 2014. Mikal Gilmore, writing in Rolling Stone in 2014, says, “Onstage, they were the personification of unity – even family. The four men dressed the same –in leather motorcycle jackets, weathered jeans, sneakers – had the same dark hair color, shared the same last name. They seemed to think the same thoughts and breathe the same energy. They often didn’t stop between songs, not even as bassist Dee Dee Ramone barked out the mad “1-2-3- 4” time signature that dictated the tempo for their next number. Guitarist Johnny Ramone and drummer Tommy Ramone would slam into breakneck unison with a power that could make audience members lean back, as if they’d been slammed in the chest. Johnny and Dee Dee played with legs astride, looking unconquerable. Between them stood lead singer Joey Ramone – gangly, with dark glasses and a hair mess that fell over his eyes, protecting him from a world that had too often been unkind – proclaiming the band’s hilarious, disturbing tales of misplacement and heartbreak. There was a pleasure and spirit, a palpable commonality, in what The Ramones were doing onstage together.”

When they came off stage, that brotherhood paused until the next gig. Joey and Johnny barely spoke to one another for most of the band’s life. Man, they struggled, despite creating a genre and influencing a shit load of bands, they never had a hit single or a hit record. At the end, they were frayed, even playing Beatlesque stadium gigs in South America and being lauded by all the new kids on the block including Nirvana, Pearl Jam and Rancid they could not break into the US mainstream. Perhaps something in them wanted it that way. In the documentary – End of the Century: The Story of The Ramones – there is footage of the band attempting to leave a gig in Brazil, hordes of young people are banging on the car and convoys are following them hanging out of windows, one of the Ramones says in Queens, New York drawl, ‘there’s always fucking something.’ There’s something I like about their being always the same, and this museum in Krezberg holds them there, and you can see them like that, anytime you want, you just got to walk through the portal. It seems like that 5 Euro lifetime membership is the deal of the century. Perhaps just like the band it celebrates, this museum creates a whole new genre of museum – you don’t have to be from a place to be at home in a place.