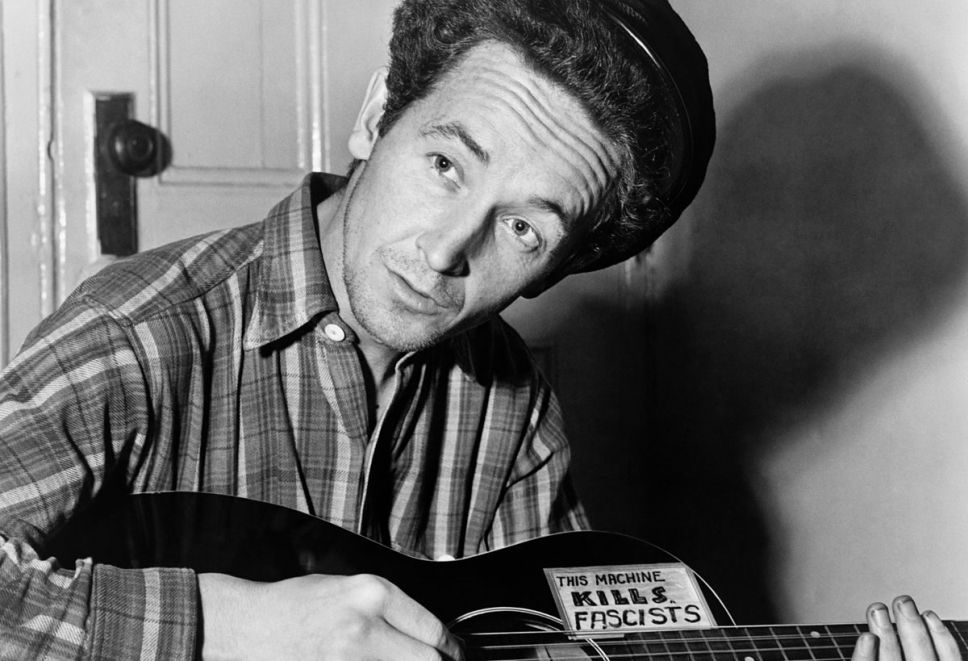 Overnight, it seems that the music industry has been transformed, with the shut-down of all live gigs and festivals. But this isn’t the first time that a major societal collapse has rocked the industry of human happiness. Here, we look at the great disruptions that have seen the music business mutate, only to re-emerge as strongly as ever.

Woody Guthrie stood on Camden Waterfront, just off Pearl Street, gazing over the Delaware River into Philadelphia, the City of Brotherly Love. The cars were like ants on Ben Franklin Bridge. Winter had passed and the spring smelt sweet and full of promise.

The railroad boxcars of the Depression era were in Woody’s head, men bouncing around inside, mouths full of dust, baked in the September heat, mean and mad, cursing and sweating, raving and preaching. He heard them singing in his head, “This train don’t carry no gamblers/ Liars, thieves and big shot ramblers/ This train is bound for glory/ This train!“

It was 1940. Almost five years had passed since The Great Dust Storm and the clouds that had appeared deathlike black, hovering in skies from Oklahoma City to the Arizona line, Dakota and Nebraska to the mighty Rio Grande. The sounds of a million feet of scattered people – of Preacher Casey and Pretty Boy Floyd; of Tom Joad and Little Muley – were weighing on his mind.

Woody Guthrie made his way down Cooper Street towards The Nipper building. Woody had heard tell that the Neapolitan, the great Caruso, the superstar of the record age, had sung operatic arias on over two hundred phonograph records right through those doors. And the Russian, the once boy-genius, Rachmaninoff, had rapidly moved his large fingers across the piano that now sat waiting patiently in a room, right there, in that building.

A lot was changing in the world. Hitler’s armies had blitzkrieged through Holland and Belgium and smashed through what the French had thought impenetrable: the Maginot Line at Sedan. The British Navy would be hauling the British Expeditionary Force off the beaches at Dunkirk within a month. America was staying out of it for now, but Woody Guthrie knew it wouldn’t be long before young Yankee boys would be crossing the Atlantic to meet God knows what fate.

He pushed through the door clutching his guitar – his machine to kill fascists – and went in. He was there to record Dust Bowl Ballads.

All the songs on that epochal record detail the devastating effects of the severe dust storms that had destroyed agriculture on the American prairies during the 1930s. The soil had turned to dust, blown away by the wind, forming monstrous black clouds and forcing tens of thousands of families to abandon their farms. They became referred to as Okies, because so many came from Oklahoma. They migrated west to California, which was still reeling from the Great Depression and was no Garden of Eden.

The social activism at the heart of Dust Bowl Ballads would go on to influence people like Pete Seeger, Bob Dylan, Bruce Springsteen and Joe Strummer. But that was all way off down the line. In April 1940, Woody Guthrie was a young man with harrowing tales of what had occurred out west, which he wanted people to know about. It was his first commercial recording and the most successful album he ever made.

It’s often cited as one of the first concept albums. Nowadays, however, we think of it first as the best take on what had occurred in the decade that became known as the Dirty Thirties. The economic boom and the Jazz Age of the 1920s had come tumbling down overnight with the Wall Street Crash of 1929. The music industry was changed utterly.

That was 60 years ago – and now it has happened again. The Coronavirus pandemic has transformed the music industry overnight, with live music temporarily, effectively ceasing to exist. Massive festivals like SXSW and Glastonbury have been cancelled, along with large scale tours by the likes of Billy Eilish and Guns ‘N Roses. Thousands of smaller acts are having their entire year – and with it their income – wiped out.

We can only hope that this will pass sooner rather than later. Some things will go back to normal. But clearly, some won’t. Many unforeseen consequences will stick around.

During the Great Depression, as the 1920s became the 1930s, the record industry almost disappeared entirely. In America, record sales were decimated from 104 million units in 1927 to 6 million in 1932. Over the same period, sales of record players plummeted from 1 million to 40,000. By 1934, only four majors – RCA, ARC, EMI and Decca – controlled virtually every label and artist in the greatly diminished market. Wurlitzer was booming, with people gathering to listen to jukeboxes in new bars that were opening with the end of Prohibition. Similarly, radio experienced a boom.

However, by the end of the decade, the music industry had bounced back. In 1938, 33 million records were sold in America; by 1941, that number had risen to 127 million. The industry was back in full swing – but it had changed. There were new popular sounds – bluegrass, gospel, hot jazz, Dixieland swing. And a new type of blues, involving a transition from country to urban. Many of its musicians were hoboes, drifting from town to town, guitar and suitcase in hand playing logging camps, rambling houses, juke joints, street corners. They were chroniclers of an apocalypse.

Not all disruptions begin with natural disasters. As recently as 1999, another seismic change occurred. It was precipitated by the arrival of Napster, the so called peer-to-peer file-sharing software that was the brainchild of Shawn Fanning and Sean Parker.

Rewind to May 1985, when Dire Straits released their fifth album, Brothers in Arms. It became one of the best-selling albums of all time and effectively revolutionised the music industry. The album was the first to sell more on CD than on vinyl. For the following quarter of a century, the CD brought a goldrush to the music industry .

By 1999, the CD was still king, with the Backstreet Boys’ album Millennium breaking all existing records, selling over 1 million CD’s in its first week of release. Then Britney Spears’ Oops!…I Did It Again hit 1.3 million sales in its first week. ‘N Sync smashed the record again in 2000 with 2.4 million sales in a week. When you consider that CDs were retailing for north of 15 dollars, you get the idea: big bucks were being made. The CD business had an annual turnover of 13 billion dollars in the US alone.

The emergence of Napster sowed the seeds for the demise of the CD, but it was not immediate. CD sales continued to grow, reaching an all-time high of 2.5 billion in 2000. Napster was being utilised mainly by tech savvy teenagers: most consumers were not attracted to illegally downloading music.

There are those who would argue that it was actually the launch of the iPod that administered the fatal blow. Between 2003 and 2011, Apple sold 300 million iPods and 10 billion songs via the iTunes store. The rise of digital listening spelled the end of the CD. Illegal downloading played a part: the idea that music was free eventually caught on. But that proved to be a temporary blip.

People have reverted to paying for music, albeit in a different form. Streaming has taken over. People are buying tracks recorded by all of the historic greats – by people like Woody Guthrie – again. Vast money is being made by record companies. How much of it makes it through to the artists is a different question.

I always go to a gig on St. Patrick’s Day but this year everything was different. I walked upstairs in my house, turned on my laptop and stepped into a shebeen that the band, The Mary Wallopers, had created in their house in Dundalk. They were live streaming a gig which tens of thousands have since viewed.

The current pandemic has had the effect of seeing musicians heading online to livestream concerts in an attempt to create revenue streams. Hot Press has had its finger on the pulse, launching the Lockdown Sessions in association with Grace O’Malley Whiskey, live streaming gigs which have thus far featured Zapho, Moncrieff, Carrie Baxter and Saarloos.

Even Bono has got in on the act, debuting a new song he wrote from his house, in what may be the most unorthodox way a member of U2 has ever released a song. Some bands have live-streamed full-scale concerts with no audience in attendance a la Pink Floyd’s legendary documentary film Live in Pompeii. Bandsintown is launching a new feature to support bands, pushing out a ‘watch live’ notification when musicians are live-streaming shows. Musicians en masse are running livestreams and virtual concerts across online platforms such as Twitch, YouTube Live, Facebook Live and Instagram Live.

Revenue from live streaming is garnered by viewers tipping the artists via Paypal or Venmo and purchasing merchandise. Earlier this month, Bandcamp took the initiative of waiving their share of the revenue on merchandise sales for three days. Of course, live streaming will never be able to replace either the revenue or more importantly the visceral, communal experience of live gigs. Nor does live streaming generate any cash for the plethora of other people who are employed in the music industry. It is no panacea.

However, new innovations may be derived from the current enforced experiment in mass live streaming. After all, live streaming does offer some evident positives for artists and punters alike. Everyone can get into the gig; it is easier to access than travelling to and from a venue; and is much cheaper to mount. And the artist does not have to pay a venue or take-on other associated costs.

Similar to the effect of other disruptors – like the Great Depression, Napster and the death of the CD – the current pandemic will create changes that may not be immediately apparent. When streaming became dominant, it had the effect of creating an explosion in bands touring, playing live gigs and festivals. With the low fees that major streaming platforms like Spotify pay, bands were forced to play live more often to generate revenue. Indeed it’s notable that, in the current pandemic, musicians have requested Spotify to triple payments to assist in covering even a small part of their loss of revenue.

Life has a way of going on.

The coronavirus pandemic will pass – or at least we hope it will – and the music industry will return to some type of normal. Perhaps the changes it inspires will not, in the end, be seismic, but that there will be enduring changes seems certain. Perhaps a new industry of live streaming and virtual concerts will mushroom. Perhaps too, great music, akin to the Dust Bowl Ballads that turned Woody Guthrie into a legend, will be created, detailing the effects of this extraordinary illness – and its brutal economic fall-out – on people all over the world.

Perhaps. It turns out that I am, after all, an optimist.