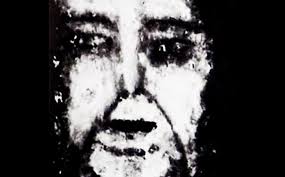 The town of Belmez de la Moraleda seemed abandoned, all the roads were blocked and prohibition signs were pasted everywhere. We were looking for the house.

We parked on the edge of town, and trudged in, the car thermometer read 41 degrees Celsius. Man, it was baking. We were looking for the house.

We rummaged through the streets looking for the house.

We got utterly lost looking for the house.

We stumbled across a sign and made our way towards the house.

We found the house. Behind the door of the house are the haunting faces of Belmez.

The eerie face-like images have being appearing in the house since Maria Gomez Camara, in 1971, witnessed a stain gradually forming into a human face. She tried to scrub it away but nothing worked. Her husband took a pick-axe to the face and re-cemented the floor. That, you would have thought would be the end of the affair, but the haunting image reappeared few weeks later. Indeed, the creepy faces multiplied.

Belmez de la Moraleda is a small town, so of course, the stone faces became the talk of it. People were freaked out. It was decided to excavate. Numerous decapitated skeletons were discovered under the floor. Yikes.

The remains were dated to the thirteenth century but nothing else is known about them. They were respectfully laid to rest in a local cemetery. And the floor was repaved. But, they came back, the faces and more and more of them.

Maria passed away in 2004. The faces still appear. Some claim it as one of the most important paranormal phenomenons of our time, others denounce it as a hoax. Whatever, the case, man they are haunting, the stone faces are haunting.

Out we came. Downhill we went. Got the car and drove away through the olive groves.