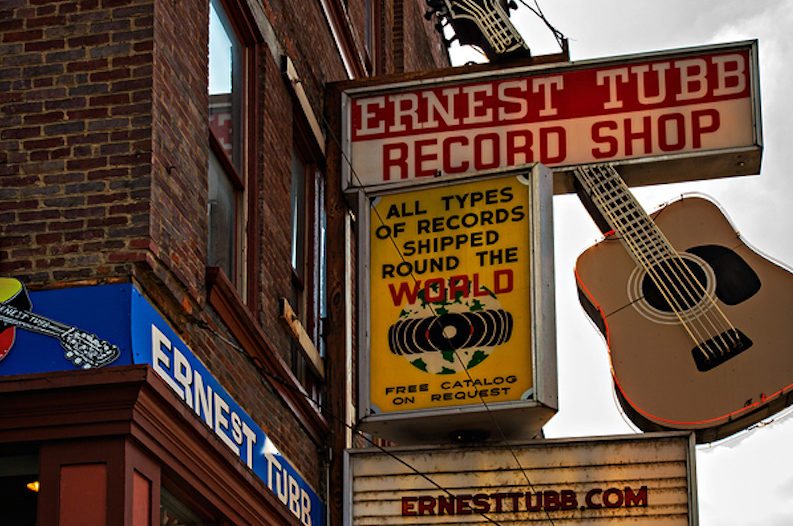 “I want my music to be simple enough, so that the boy on the farm out there can learn it and practice it and try to play it, ” Ernest Tubb in conversation with Peter Guralick, Lost Highways

“You gotta change your name son, how about Texas Crisp?”

That’s the fist thing the head buck cats at the record label would have done, before morphing Ernest Tubb into a monstrous changeling torn from his West Texas plainsman roots. Thankfully, in 1941, the labels were not yet the Dr. Frankenstein’s that they evolved into, albeit from what I can gather about Ernest Tubb, he wasn’t a man for changing for nobody. He hailed from the old world, off a farm near Crisp, Texas, off little known Route 45, just south of Dallas, where he worked the fields listening to crackling phonograph records of Ethel Waters and Bessie Smith. One Saturday night, the thirteen year old Ernest Tubb was sprawled out on his bed, wrecked after a week of back-breaking graft, when he heard Jimmie Rogers on the wireless yodeling and he knew what was meant for him.

He took to rambling the farm, being like Jimmie, or at least how he thought Jimmie would be with nothing to go on, except that miraculous voice. He took a fair ribbing from his family, but he got to being pretty good at yodeling himself, but man, he needed a guitar so bad. It would take a while, things like a guitar weren’t easy to come by in Texas in the 1920s. Whilst travelling by thumb express from Benjamin to San Antonio, he saw a guitar in a store window in Abilene, he had five dollars, fifty cents, all he had in the world, he gave it up for that guitar.

He dug ditches in San Antonio, pedaling into town on his lunch breaks to sing Jimmie Rodgers songs in service clubs, landing him a fifteen minute slot on 250-watt radio station KONO. He would clamber out of his warm bed at five in the am, leap on his bicycle and pedal through the freezing desert air for his five thirty slot, singing Jimmie Rodgers songs into a can for gratis.

In 1935, idly looking through the phone directory, his eye found Mrs. Jimmie Rodgers. Sweet Lord. He called, she answered, it was the Mrs. Jimmie Rodgers. She believed in Ernest, heard something in his voice that set him apart from the many other Rodgers imitators. She set up a tour for him and off he went, dressed in a suit of Jimmie’s, clutching Jimmie’s two thousand dollar guitar. Cripes.

Stuff still didn’t come easy. He slogged about Texas for the Texas Brewing Company flogging beer by performing at beer drive-ins. A change in direction occurs on the vinyl he cut for Decca Records in Houston in 1940. He recorded the self-penned, I’ll Get Along Somehow and Blue Eyed Elaine. Sans tonsils. Yodeling was no more. Ernest had discovered his own style.

In the long, hot summer of 1941, the last summer before Pearl Harbor with Joe Di DiMaggio knocking home runs out of every stadium and Jelly Roll breathing his last, Ernest arrived in Bunny Briggs’ tiny Dallas studio to cut a record about which he had a damn good feeling. Initially, he was bugged to discover that his regular guitarist Jimmie Short wasn’t there. Fay Smith, the studio guitarist stood in. The producer Dave Kapp was dissatisfied with the result but Ernest thought the opposite and begged for it to be released. Fortunately Kapp relented or we would never have heard the fantastic single Walking The Floor Over You.

It was a hit, selling over 400,000 copies in the first year alone. Ernest was a twenty-seven year overnight success. Boy, it’s a supreme track. Two minutes and thirty-seconds of foundation stone honkytonk with Shakespearean themes of broken promises, heartbreak, anguish, unrequited love, abandonment, treachery, betrayal – all delivered with Ernest’s smooth vocal, now again exhorting the young Fay Smith with, “Oh pick it out Smithy” and “Oh, do it pretty son,” on what is one of the first electric guitar solos in country music.